Hydrogen bond analysis within a protein

You want to study the hydrogen-bonds within a protein system

This recipe focuses on the analysis of intra-molecular hydrogen bonds as a protein unfolds at high temperature. For an example about hydrogen bonds between two independent systems (i. e. between a protein and a small molecule) follow this recipe.

Hydrogen bonds are an important non-covalent structural force (primarily electrostatic in nature) in molecular systems. They are formed when a single hydrogen atom is effectively shared between the heavy atom it is covalently bonded to (the hydrogen bond donor) and another heavy atom (the hydrogen bond acceptor). Both the donor and acceptor atoms are typically quite electronegative.

CPPTRAJ will find and track hydrogen bonds over the course of a trajectory. Hydrogen bonds are determined using simple geometric criteria: the donor to acceptor heavy atom distance, and optionally the donor-hydrogen-acceptor angle. Hydrogen bond donors and acceptors can either be searched for automatically (using the FON criterion) or can be explicitly defined by the user via atom masks. CPPTRAJ will also track solute to solvent hydrogen bonds and solvent bridging interactions (i.e. two or more solute residues hydrogen bonded to a single solvent residue).

Note that in nature, the strength of a hydrogen bond is determined by both distance and angle (having to do with optimal overlap of molecular orbitals). However in most pairwise additive force fields (e.g. Amber, Charmm) hydrogen bond interactions arise solely from non-bonded terms and therefore their strength is not dependent on angle.

In this example we will use CPPTRAJ to find and track hydrogen bonds during the unfolding of the model beta hairpin peptide Trpzip2 (PDB 1LE1) at 345 K.

Note that although input is provided in a file, users are encouraged to use the interactive mode to become better familiar with CPPTRAJ workflow and command options.

Start CPPTRAJ by typing ‘cpptraj’. Load the topology and trajectory with the following commands:

The first hbond command will be used to track all solute-solute and solute-solvent hydrogen bonds (all solvent residues are named WAT, the Amber default), as well as solute-solvent-solute bridging interactions:

The number of solute-solute and solute-solvent hydrogen bonds, as well as the number of bridges and the identity of bridging residues will be written to ‘All.hbvtime.dat’. Average statistics on each found hydrogen bond will be found in the files ‘All.UU.avg.dat’, ‘All.UV.avg.dat’, and ‘All.bridge.avg.dat’.

The second hbond command will be used to track only solute-solute backbone hydrogen bonds. As such we will provide a mask so that only C, O, N, and H atoms will be considered as potential donors/acceptors. We will also specify the series keyword so that the time series of each found hydrogen bond is recorded for further analysis (1 for hydrogen bond present, 0 for not present).

The uuseries keyword will write the raw hydrogen bond time series data to bbhbond.gnu, which can be visualized using gnuplot. 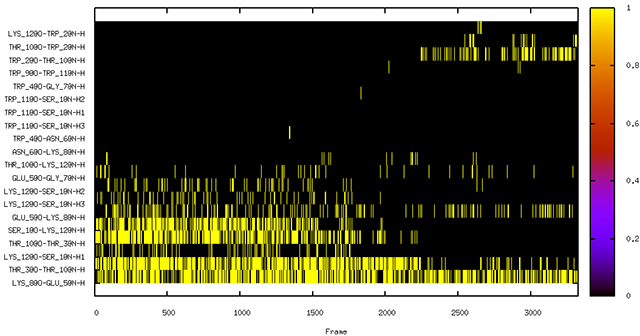 Finally, we will add an RMSD command to calculate backbone RMSD to the first frame as a means to track unfolding (Note this is not part of hbond analysis):

When the run has completed take some time to review the output files. In particular note the point at which the backbone RMSD increases (BBrmsd.agr, top plot), and see how that change correlates with changes in the number of solute-solute and solute-solvent hydrogen bonds (nhbvtime.agr, bottom plot). 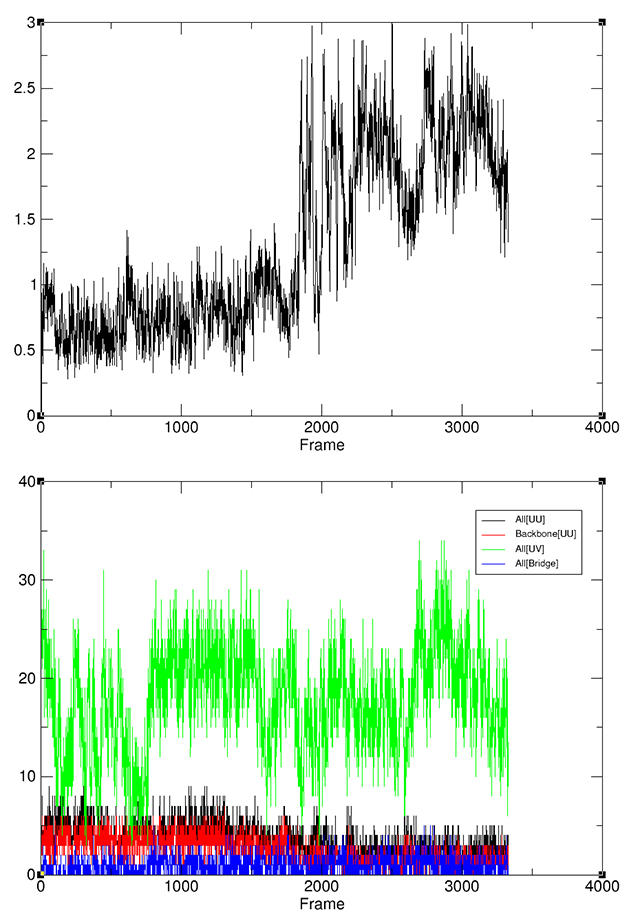 This will also generate so-called lifetime curves in ‘crv.backbone.lifetime.dat’, which is a means of visualizing the time-dependent behavior of the hydrogen bonds.

← Combined clustering analysis
Create an ensemble of PDBs from a trajectory →