Calculate states between a small molecule and a receptor

You want to calculate how much time is spent in a particular conformation or state from a simulation between a small molecule and a receptor.

The calcstate command can follow multiple geometric datasets (like those generated by the distance and angle commands) and assign a specific pre-defined state when the criteria matches. To illustrate this, we will use a simulation of a small copper-based compound (Cu[acethyl-acetonate][4,7-dimethyl-phenanthroline]) and the interaction with a 12-mer DNA.

The simulation shows how the ligand explores the minor groove of the DNA as it closes into an AT base pair and eventually pushes the base pair apart, breaking the Watson-Crick pairing.  The ligand then gets inserted into the resulting cavity and stays in that pocket for the remaining of the simulation. The topology and the trajectory file of the shown simulation are available here and here.

We want to know how these process develops over time and how much time a particular state is populated. We will define three states: Groove Binding, Partial intercalation and Intercalation. We will define each state using three values, two distance related and one angle related. The first value will be the distance between the ligand (residue ID 25) and the top and bottom base-pairs that form the binding pocket (residues 4,6,19 and 21). The second set of values will be the distance between the AT base-pair that breaks the Watson-Crick pairing and shifts toward the major groove to allow the ligand to move inside the DNA. This will be a distance measure of the center of mass between residues 5 and 20. The third geometric value will be an angle measurement between the ligand (:25), the top base pair in the cavity (:4,21) and the bottom base pair in the cavity (:6,19).  Using these three geometric values, we can define our three states.

This will show that for 21% of the simulation, the system is in an undefined state where the ligand do not match any of the criteria we defined in the CPPTRAJ command. The ligand spends 13% in the Groove state, 25% in the Partial state and 39% in the Intercalation state.

Plotting the file named ‘calcstat.curve.agr’ will show the state lifetime and transition curves for each transition. For our particular case we can see that all the previously defined states will visit an undefined state as seen above. We can also deduce that there is a balance between the groove state and an undefined state that could be further investigated in detail. 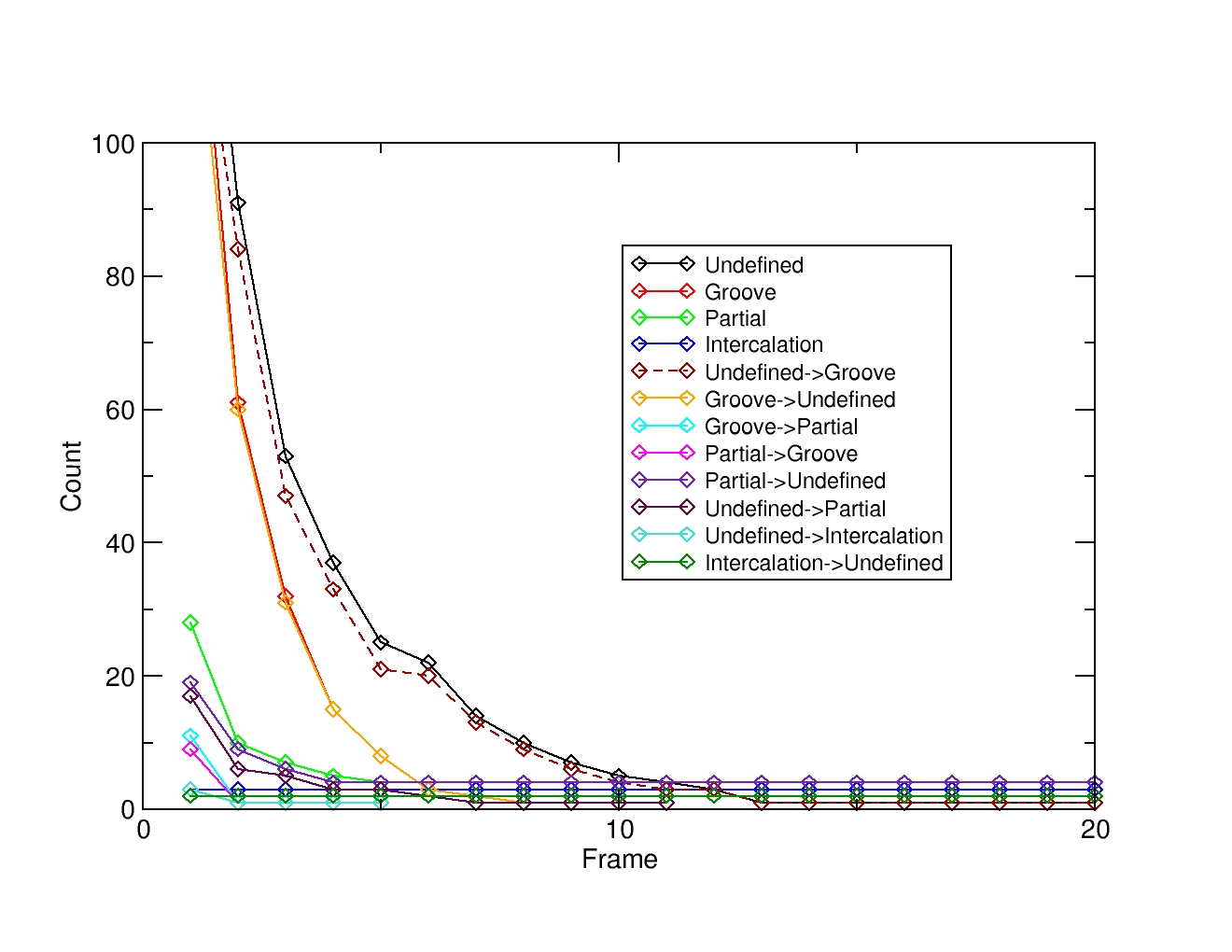 ← Hydrogen bond analysis between a protein and a small molecule
Comparing the structural difference between a series of structures. →